Ban This Filth! heads to Camden for its London premier on:

November 5th (Tues) @ Camden People’s Theatre. Part of Calm Down, Dear: a festival of feminism. Double bill tickets are available for Ban This Filth! & Pretty Ugly at £15 / 12. Please note, these tickets are only available on the door. 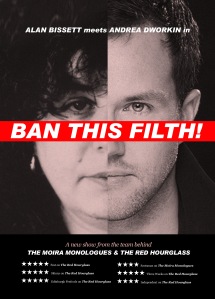 “Andrea Dworkin: radical feminist.  Alan Bissett: man.  One stage.  Bissett plays ‘himself’, telling stories from his own life, with a penis, and Dworkin, one of the most controversial women in history, who has a few things to say to him. Expect laughter, Led Zeppelin, and a live ‘reconditioning’ of a man who’s had it all too easy. Until now.”

Shortlisted for the Amnesty International Freedom of Expression Award.

**** 4 stars (selected as Hot Show) ‘The brilliant Scottish writer Alan Bissett … What’s striking is the grace and discipline … He is eloquent and very funny … Bold in his use of audience participation and physical theatre … Oddly magnificent.’ – Joyce McMillan, The Scotsman

**** 4 stars ‘genuinely fascinating exploration of feminism, pornography, and the ingrained individualism we plant into issues which stretch far beyond just ourselves’ – National Collective